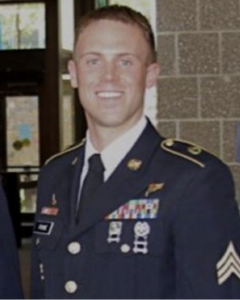 On Veterans Day, we honor and thank the courageous men and women who are serving and have served in the US military. Several of these heroes now work at Ascend, like Andrew Payne, a product content developer for Ascend’s NASM and AFAA businesses.

Andrew Payne is currently a product content developer for NASM and AFAA. He served just shy of five years in the Army after graduating college, and was stationed in Fairbanks, Alaska with two combat tours to both Iraq and Afghanistan. He describes his time serving in the military as a “rite of passage” or “coming of age.” He shared that, “While I spent a similar half decade of time in both college and the military, I barely aged a day during college and matured 20 years in just five years of military service!”

Staying calm under pressure is second-nature to Andrew as he describes, “It just makes more sense to keep a level head and think through every tough situation critically and calmly, because as much as it might feel like the end of the world inside, it never is.” Overall, the time Andrew spent in the army provided him with unparalleled self-development and many lessons of self-efficacy.